One takeoff after another ensures some exciting moments in Silverstone! A wet start behind the safety car helped Lewis Hamilton to increase his position who was able to win at his home race! A couple of laps before the finish Mercedes decided to contact Nico Rosberg and inform him about a gearbox problem. Max Verstappen comes in third after a couple of impressive attacks on Nico Rosberg. 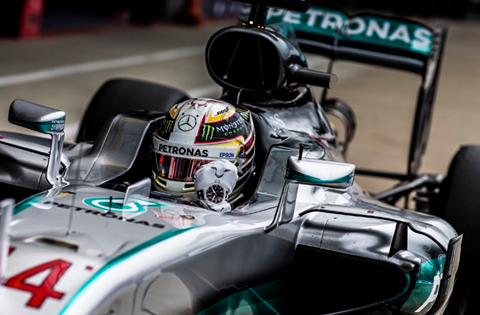 The tenth GP of the season in Silverstone started behind the safety car. The impatient world champion Hamilton appeals to Charlie Whiting after five laps to finally let them start the race. After this lap the safety car came in and the race was ready to go. Half of the field decided to come into the box for a tire change. Both Mercedes pilots stayed on the race track and Max Verstappen started to attack Nico Rosberg.

The race was over for Pascal Wehrlein in the seventh lap because of an aquaplaning incident in the first turn. In the following lap the top three came in and changed to inter tires which was still during the virtual safety car.

The sensational overtaking of Max Verstappen on the outside line in lap 16 against Nico Rosberg was another exciting moment. A small spin of Sebastian Vettel (who was only to start from P11 because of his gear change) in turn two showed how quickly the tire surface cooled down. Also a couple of other drivers, like Carlos Sainz, took a spin during the race.

In lap 26 the second Manor driver, Rio Haryanto, departed. Max Verstappen covered Nico Rosberg and kept his second position during the first half of the race. Meanwhile Lewis Hamilton had a free ride in his Silberpfeil. In lap 38 Rosberg was able to overtake the Red Bull car of Verstappen. The fastest lap time followed for the Mercedes pilot who then tried to pressure Lewis Hamilton. Hamilton’s fastest lap was deleted in the qualifying but he was able to win the pole during the last minute again.

Five laps before the finish line Mercedes risked a penalty in order to inform Rosberg about a gear problem. He shall avoid shifting to gear 7 to be able to end the race safely. They offended the radio guidelines thereby. This decision is “under investigation”.

The local hero Lewis Hamilton won the 50th british GP in Silverstone and his home race! The fifth win of this season and his 47th win of his career was earned by the British guy. Nico Rosberg came in second in front of Max Verstappen.